This blog has been written by Anushe Noor, Member of  DRF’s Network of Women Journalists for Digital Rights.

The Aurat March 2019, which sprung controversy all across the country, was a movement organized “by women and for women” in order to advocate against patriarchy and violence against women. The manifesto demanded to end gender-based violence and discrimination. It demanded labor, reproductive, educational, digital and economic rights for women. The movement was taken to the roads as an International Women’s Day celebration in Lahore, Karachi, Quetta and Islamabad and it was joined by both men and women. Women celebrated freedom and liberty which they demand from the society.

However, criticism by religious clerics, political representatives and some segments of the public was seen through different platforms. The Khyber Pakhtunwa Assembly passed a resolution against the March deeming it to be “shameless and un-Islamic”. Fazl ur Rehman, President of the Jamiat Ulema-e-Islam, also called for action against the March through united action by religious groups. Yet, the most hatred was seen through the lens of social media where the images of the placards and posters floated with comments about them which opposed the March for being against the religious, social and cultural norms of the country.

It was claimed that these placards and posters were pushing women to follow the Western culture and trends. The comments also claimed that women were unable to present their “real issues” and concentrated on the mere ones. 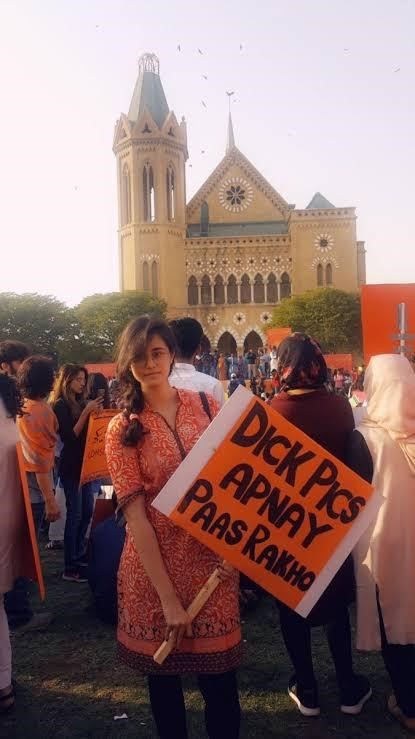 For example; the placards saying “Dick pics apne paas rakho (keep your dick pics to yourself)” were declared as “shameless” yet what was not considered was the fact that these placards were a reflection of the society. They forgot to focus on the root cause of the issue but all they saw was the “unethical” non issue. Women have been a victim of cyber harassment in which sending unsolicited images on social media is one of the major issues. Irony of the moment is that the act was not characterized as immoral, unethical and shameless but a movement to highlight it, sure was.

Alongside criticism, the organizers of Aurat March were also threatened by conservative men and women. A peaceful March did not only harm their fragile egos but also caused them to start off an anti Aurat march campaign with slogans of women claiming to be empowered within the social, religious and cultural limitations. The discussion over the pros and cons of the March took to every nook; educational institutes, households and workplaces. Yet, the majority of people rather than accepting, supporting and appreciating the movement were against it. I remember a male classmate yelling at my face that the Aurat March was a Western propaganda to “give women an opportunity to get naked”. And this incident took place in an international institute having a “liberal” environment.

After the Aurat March, the discussion over the whole crisis and the movement has increased. However, this constant backlash is not helping women at all. Women who have to face a lot of hurdles already have to overcome further hurdles and unjust arguments. The healthy debate which was expected has taken a different turn where women are being put down through the pressures imposed by society, culture and religion. Women are being targeted on the internet with trolling taking on new limits.

What is there to question is that is this hatred against women sprung after the movement or has it been revealed through it? The backlash that women have faced after the Aurat March through online and offline channels; proves how accurate women were about the discrimination and violence they have been facing over the years. The burning responses and the rejection of the movement strengthen the stance of the women at the Aurat March.

Have women been safe or can they feel safe now? Not as yet! There is a long way to go for women to find liberty, freedom and equality under the slogan “Hum Aurtien”. United women are stronger women; and with every step women are closer to the success of their movement.