This blog has been written by Anushe Noor Faheem, Member of  DRF’s Network of Women Journalists for Digital Rights.

Ranking at 139 out of 180 countries based on freedom of the press, Pakistan has always been a part of the buzz for its notorious censorship laws.  Let alone, the state imposed censorship had not been enough when the hashtag #ArrestAntiPakJournalists took hype over the past few weeks. Under this hashtag, prominent journalists and TV anchors were targeted for being critical of the state and the military. Their pictures along with hateful messages went up to 28,000 shares; with it being the second most trending hashtag on twitter. 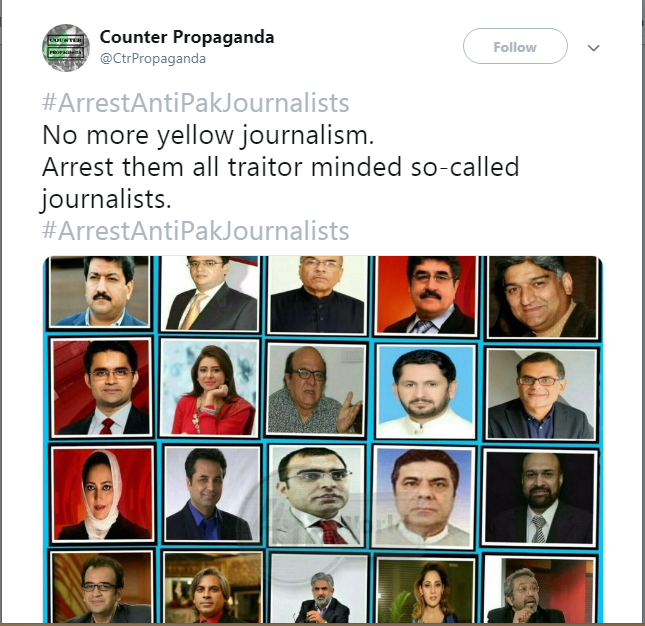 Accusations of corruption, biased reporting and analysis were being made. They were labelled for running an “anti-state” propaganda funded by the international lobbies to weaken the state affairs by reporting content that was “against” the current government and the establishment. The “traitor” tag was a definite add-on. 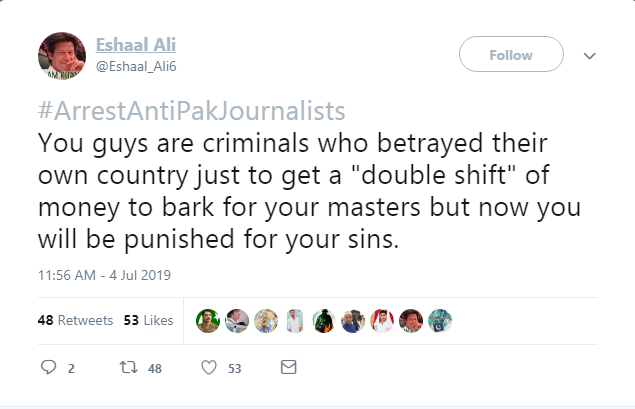 All these patriots and netizens had the view that the purpose of journalism was to protect the state and its affairs by reporting the “positive image” of the system, without realising the definition of the term itself. These social media users were living under the shadow of misled thoughts and ideas; which distorted their definition of patriotism and nationalism.

According to the American Press Institute;

“Journalism is the activity of gathering, assessing, creating, and presenting news and information.”

Keeping in view the definition of journalism, there is no aspect of patriotism or nationalism attached to it. The purpose of journalism is to gather, assess and present news and information not to mold it for the “welfare/wellbeing” of the state.

“Journalism is a form of writing that tells people about things that really happened, but that they might not have known about already.”

With this definition, another aspect to journalism is revealed that it is the profession of narrating what really happened which people might not have known already. Journalism is about assessing (proofreading) raw news and presenting detailed analysis of the actual event/news. Here, different aspects and viewpoints are collected and opened for debate. A journalist does not/should not form opinions and enforce them on the audience but to create a sense of questioning and curiosity. The views and opinions of the audience are created after they are given the opportunity of assessing it themselves. The actual image cannot be mended by journalists to fulfill the goals and targets of the state; it can only be presented with all angles.

It is the need of the hour to learn that journalism is NOT a profession of community and state welfare. It might be controversial and debatable, but the baseline of journalism cannot be tailored according to the needs of the state. Journalists, already face state imposed censorship and intimidation with addition to this campaign another pressure is being built. Freedom of press and expression are basic human rights of any person, living in a democracy. Hence it is to be known that; media does not belong to the state yet it is a free and open source of news and information.