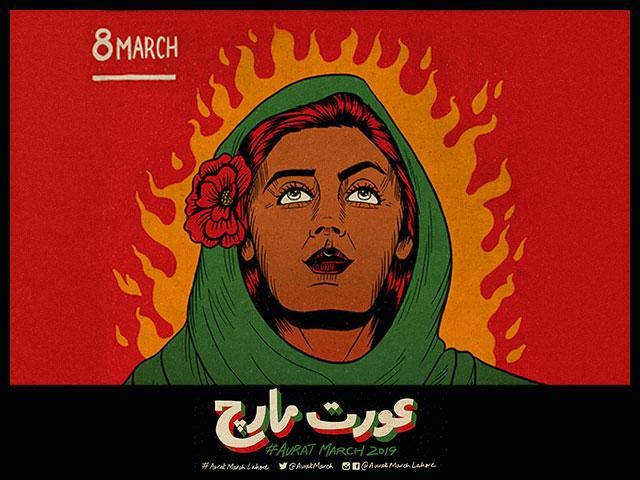 This year was the second edition of Aurat March, which was held on International Women’s Day. Before proceeding further, it is important to understand what the Aurat March demands from the state and all of its counterparts. The manifesto clearly pushed for accountability and restorative justice against violence, standing with women who experience violence and harassment at the workplace, at home, in public spaces and at the hands of security forces. Among other things, it also demanded economic justice, including implementation of labour rights, the Sexual Harassment Against Women in the Workplace Act 2010, recognition of women’s input to the ‘care economy’ as unpaid labour, and provision of maternity leaves and day care centres to ensure women’s inclusion in the labour force.

Under the banner of ‘Hum Aurtein’, similar marches were held in Lahore, Islamabad, Hyderabad, Quetta and Karachi. On the day, women held placards and posters carrying various slogans, which highlighted a range of issues faced by women from all walks of life. Some slogans talked about consent, domestic abuse and discriminatory attitude towards women. 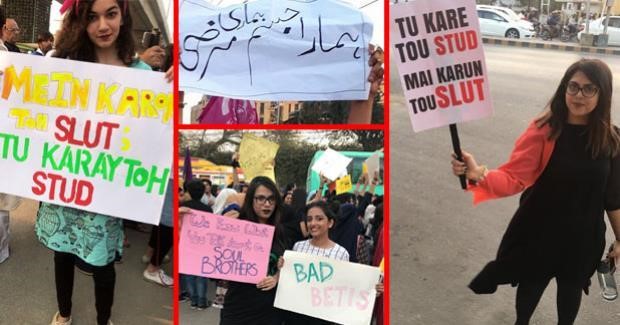 Following the March, some ‘controversial’ posters went viral on the social media and received strong backlash from twitterati. Majority of the people from Khyber Pakhtunkhwa said that the March will further divide men and women in society while some also supported it. The most common criticism was that the posters highlighted ‘non-issues’ and the March had failed to talk about the actual issues faced by women.

The backlash against Aurat March and its organizers took a turn when the organisers were severely harassed online and also given rape threats. The backlash escalated when people began doctoring images of posters to circulate them on social media and stir up further controversy. Women who attended the March say they have been suffering from online bullying, harassment. Especially the placards with slogans such as, “Khana main garam karoongi, tum bistar khud garam karlo”, “Lo baith gayi sahi se” and “Main awara hoon” “Divorced and Happy” and “Dick Pics Apny Paas Rakho” “Period is not a Luxury, Stop Taxing our pads” “Main Awara Main Badchalan”. 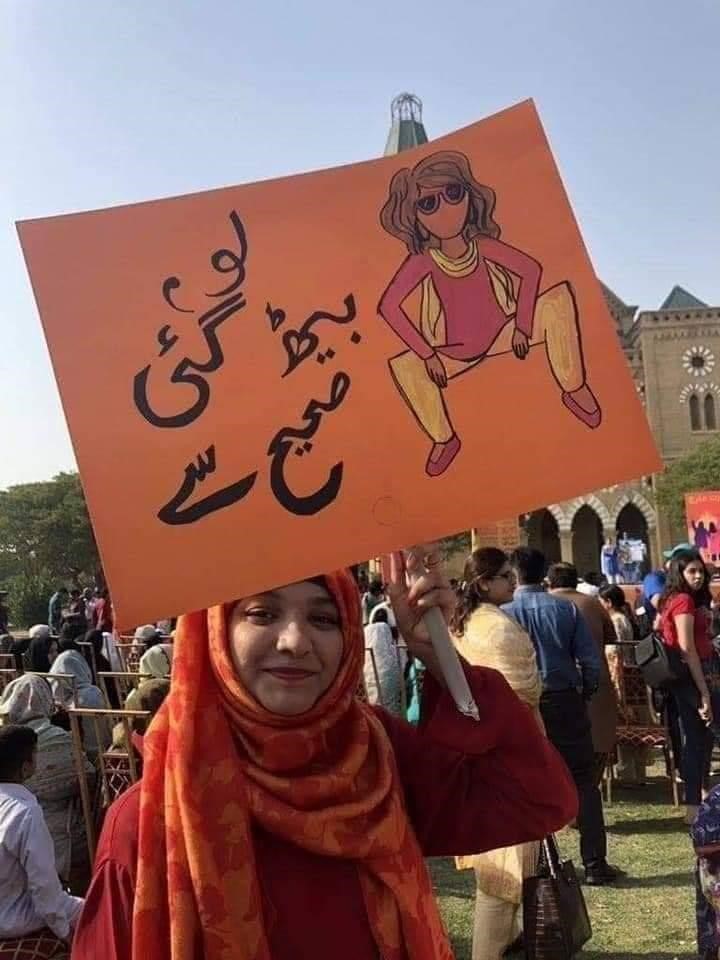 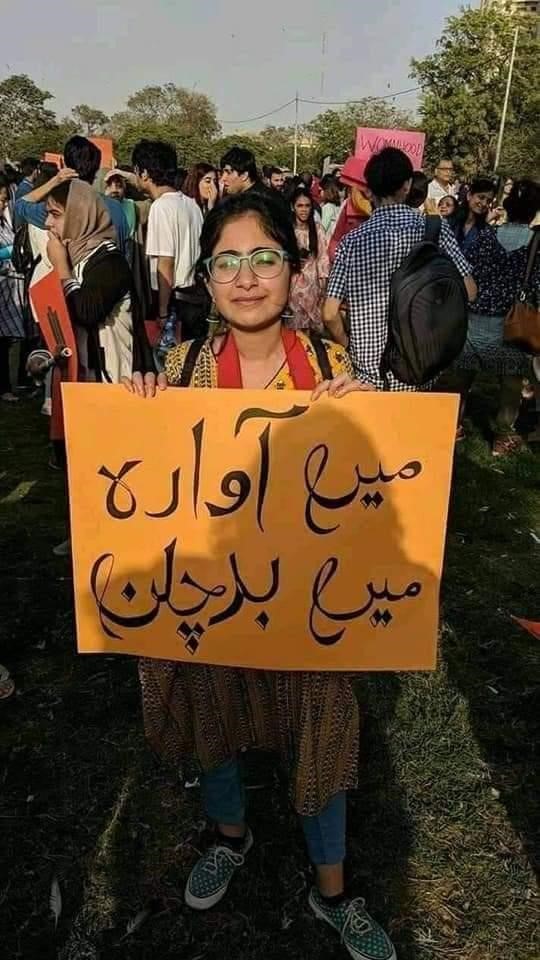 The slogan, “Divorced and Happy” was shared repeatedly with captions like, “Look at these frustrated women who are divorced and now they want to damage our culture”, “These women could not make their own homes and now they want to spoil other women’s homes also”, “These useless women are promoting divorce culture”.  The links below show some of the comments: 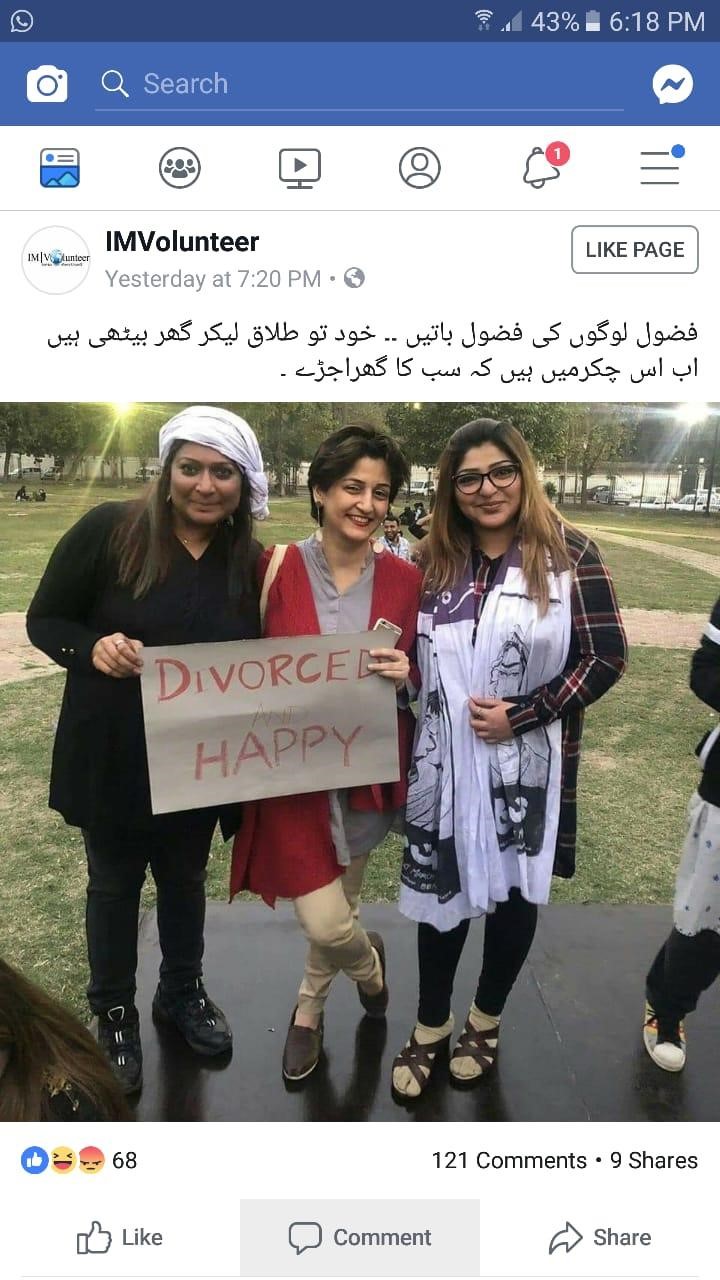 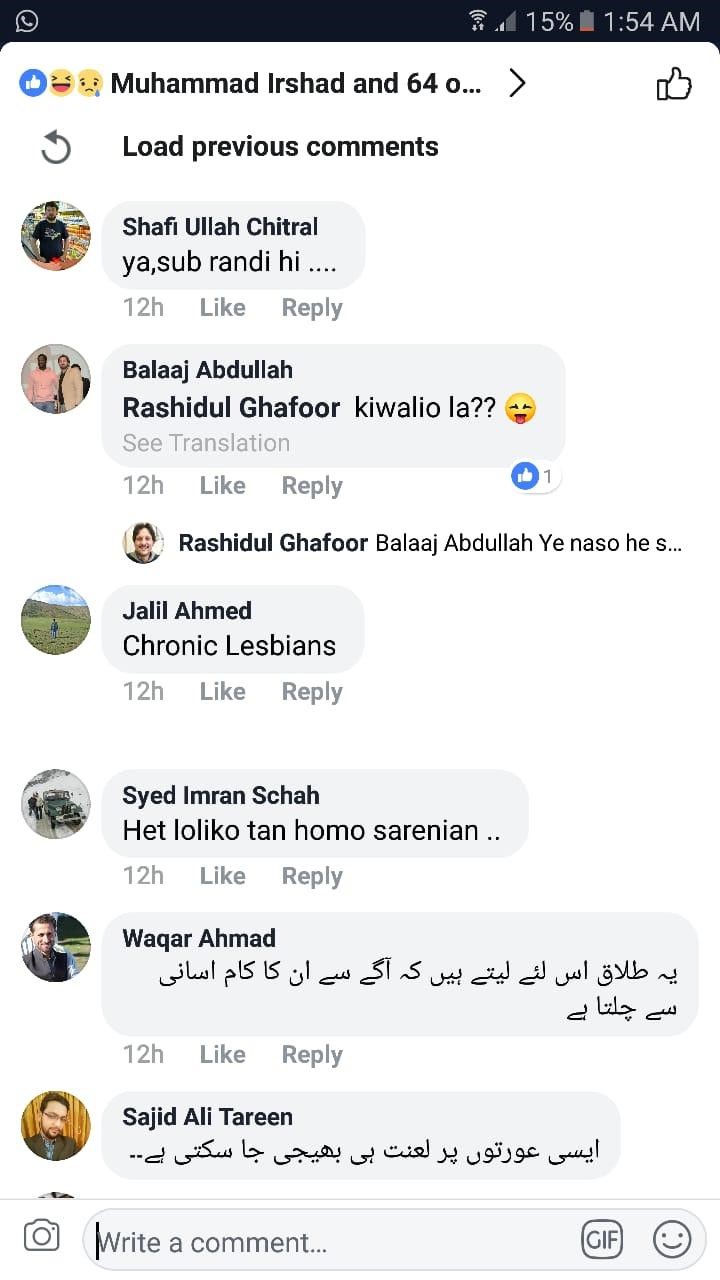 In Pakistan, cyber harassment qualifies as a crime according to the Prevention of Electronic Crimes Act, 2016. This specifically looks at offences against the dignity of an individual, i.e. sharing doctored images, fake profiles, hate speech, blackmail, harassment, stalking, revenge porn and other offences. If convicted, an individual can be sent to prison and fined as well. However, this hasn’t stopped the spate of hate as a lot of people shared pictures of women who were holding placards in Aurat March along with hate speech and captions and that became a trend for few days in Khyber Pakhtunkhwa province of Pakistan.

The backlash moved to mainstream media as many journalists from Khyber Pakhtunkhwa used their TV shows to share their thoughts against the March and also took to social media to express their anger. A journalist went so far that he edited a placard with the slogan “Ao Khana sath banaen” with the slogan for women “Ka zma Poza na vey nu ma ghul khwaral”- which means, If I didn’t have a nose, I may eat shit”. It is an old traditional saying which means that women are less intelligent and they do not know anything. Having a nose is the only reason that they can distinguish between food and shit. 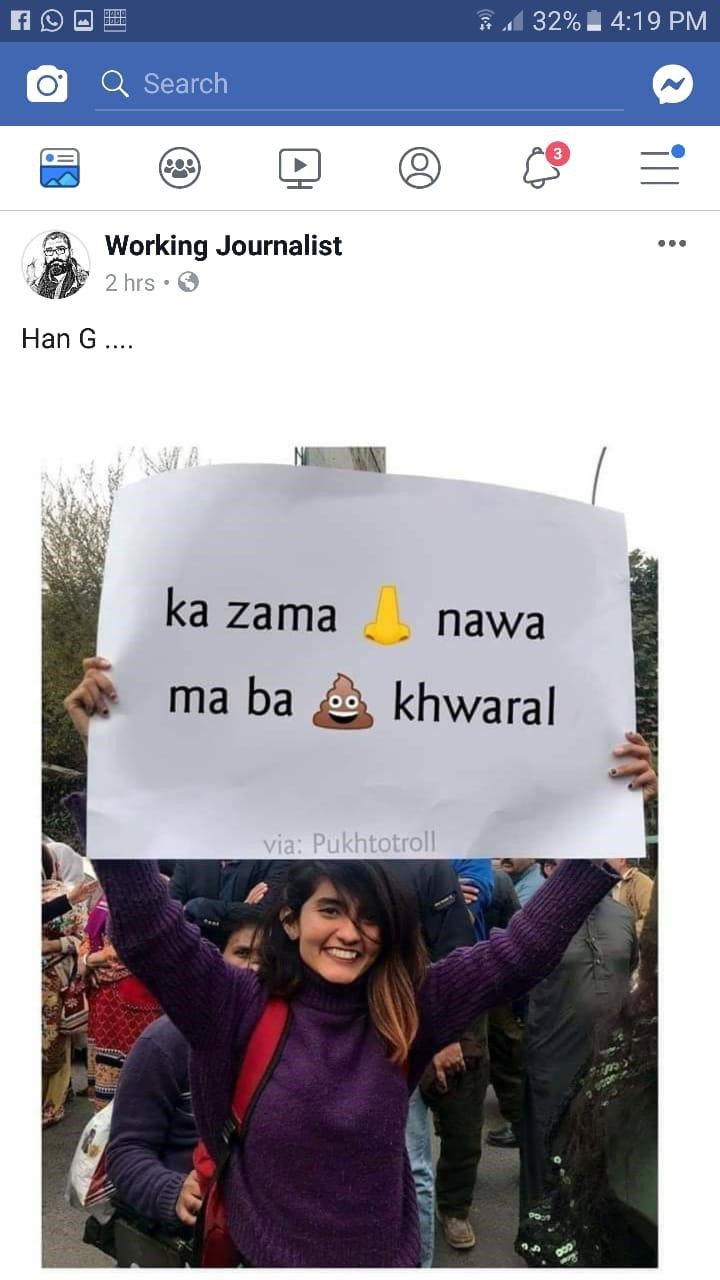 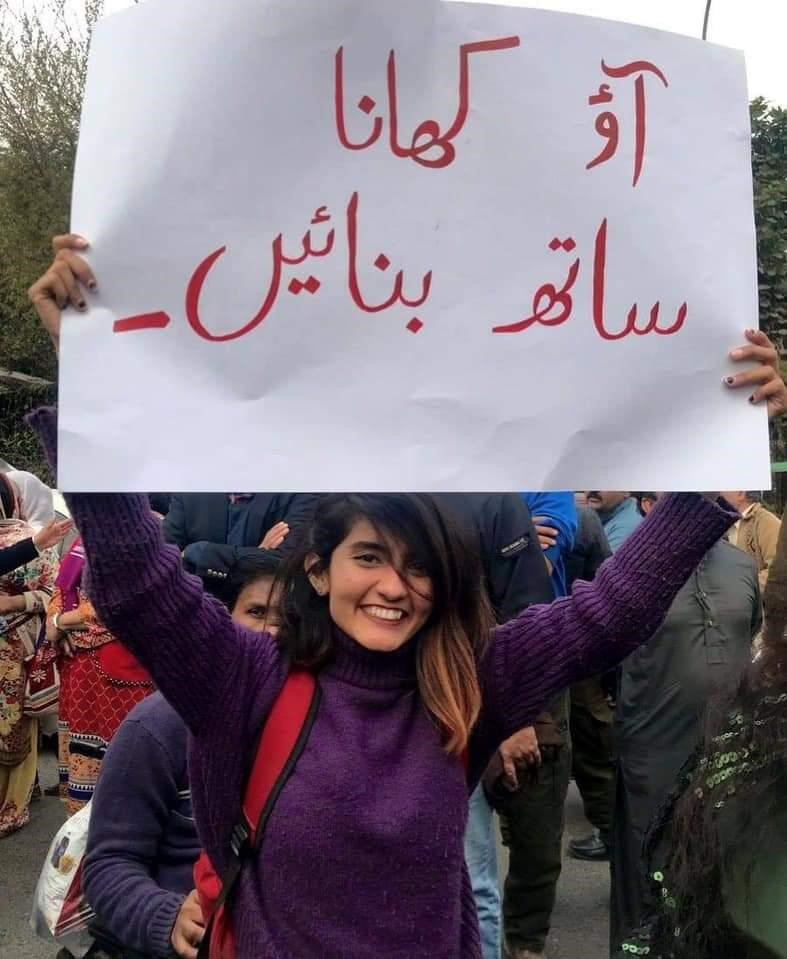 The hatred further moved to legislative assemblies with the Khyber Pakhtunkhwa Assembly on 13th March unanimously passing a resolution condemning the Aurat March, which was held across Pakistani cities on March 8.

The resolution, presented by Rehana Ismail of the Muttahida Majlis-i-Amal (MMA), claimed that women had taken part in the march holding placards and raising slogans that were “obscene” and unacceptable.

“Some hidden forces have sped up their efforts to destroy our family system and social customs, the practical demonstration of which took place on March 8, 2019, in various big cities on Women’s Day,” the resolution stated. 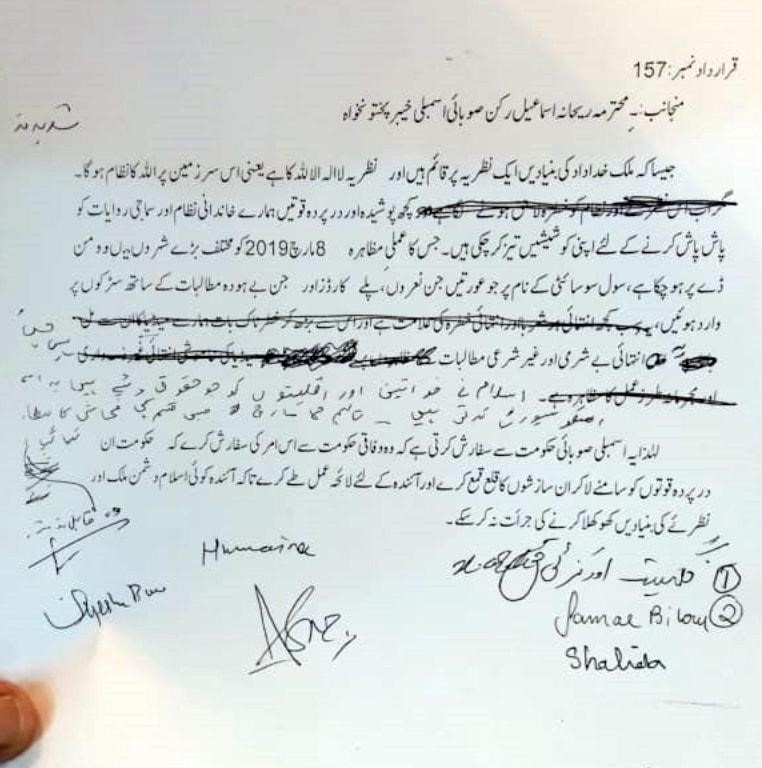 The resolution said that the demands made at the event for women empowerment were “shameful and un-Islamic”. The document stated that although the provincial assembly supports the rights granted to women and religious minorities by Islam, the “obscenity” witnessed on March 8 was not acceptable to it. It is pertinent to mention here that recently the domestic violence bill was approved by our provincial assembly which was sent to dead lock for three times. As the religious parties like MMA, Jumat-e-Islami and Jamiat-e-Ulema parties were not accepting it as a law, while Jumat-e-Islami claimed that religion gives this right to a man that he can beat his wife slightly if she deviates. So Khyber Pakhtunkhwa was the only province that didn’t had a law for violence against women and domestic violence while all other provinces had that law.

The resolution asked the KP government to request the federal government to “expose” such forces and their “conspiracies” who are supporting and funding Aurat March and prepare a strategy to deal with such incidences in the future.

The resolution in its original form was opposed by MPAs of the ruling Pakistan Tehreek-i-Insaf (PTI), but after some redaction and negotiations, they agreed to unanimously pass the measure.

Speaking during the session, PTI MPA Ayesha Bano said they supported organizations that speak for women’s rights, however, “We do not accept any demands of women which are against Islam.”

Opposition leader Akram Khan Durrani, who also belongs to MMA, recalled that a banner at the Aurat March had read “Apna moza khud dhundo (find your own sock)” and said: “If I have pain in my back and my wife helps me put on a sock, what is wrong in that?”

PML-N’s parliamentary leader in the KP Assembly, Sardar Muhammad Yousaf Zaman, claimed that certain NGOs were working against Islamic injunctions and the Constitution. “Shamelessness is being spread in the name of ‘change’,” he stated.

The resolution presented by Rehana Ismail of the Muttahida Majlis-e-Amal in the provincial assembly of Khyber Pakhtunkhwa, and it carried the signatures of Pakistan Peoples Party’s (PPP) Nighat Orakzai, Awami National Party’s Samar Bilour and Shahida, Ayesha Bano and Ayesha Naeem of the Pakistan Tehreek-e-Insaf.

Bilawal took notice- PPP chairman Bilawal Bhutto took notice of Orakzai’s endorsement of the resolution and sought an explanation from her. As she is a well-known politician of PPP in Khyber Pakhtunkhwa. Bilawal reprimanded her for going against the party’s policy. Orakzai, however, clarified that she was not against International Women’s Day but the slogans displayed at the Aurat March events.

Aurat March Peshawar organizer Gulalai Ismail criticized the move and lamented the fact that even secular parties did not stand behind female empowerment. “Instead they are aligning their political goals with the status quo”. Ismail said participants wanted to highlight the oppression and gender inequalities in society. She added, Aurat March stresses on the role women play in peace building and creating a healthier society. While the event attracted tens of thousands of women on March 8 and was only the second of its kind in the country. While organizers said they were at the receiving end of death and rape threats on social media over the event, which prompted complaints from some conservative groups.