A very thought-provoking question arose during Digital Rights Foundation’s workshop on ‘investigative journalism in the digital era’, which was held in Quetta in October 2018. A participant asked the trainer, Mr Iqbal Khatak of Freedom Network, that amidst the pressure of being the first to break the news, what quick strategies can journalists employ to verify the sources and avoid giving out news which is later found to be fake. The question sparked a discussion amongst the participants which unfolded serious topics including ethics of journalism and their relevance in the digital age, fake news as a threat to democracy, disinformation and quality journalism.

While there is no one-size-fits-all answer to the question raised, there are strategies and techniques that a journalist must always use as part of their professional ethics in order to verify user-generated content and open source information for reporting as well as conducting investigations. Some tips were discussed which were derived from Craig Silverman’s The Verification Handbook for Investigative Reporting used world-over by journalists working digitally. One of the first tips was that the journalist must know their search engines more accurately, for example site:twitter.com will only show up results from Twitter. Another tip for journalists is to verify the data twice, before and after the analysis. Before analysis, it is important to see if the data is incomplete, needs cleaning or is inaccurate while after the analysis is done, second verification serves as an acid test to know if the story or initial hypothesis is sound. For other tips, the handbook can be read online here (http://verificationhandbook.com/book2/chapter1.php). Importance was also laid down on the fact that it was relevant for journalists to set out their own rules for source verification and list down the things that they can use for reporting in the future – this can serve as their own handy book of tips.

The workshop progressed to discuss the important stages of investigative reporting, from finding a story to planning, mapping sources, conducting research and writing. There was a detailed discussion on source mapping – the need to identify key actors in the story and any documents that record their actions. For every detail, it is necessary to use at least two independent sources. Sources can be primary (sources that provide first-hand evidence or relate direct experience) and secondary (include all kinds of published materials, including organisational reports and second-hand accounts). Participants also learned that they can differentiate between the four types of source material, including human, paper, digital and crowd-sourced. The table below, derived from Investigative Journalism Manual, provides the use of each of these four types, and their strengths and weakness. 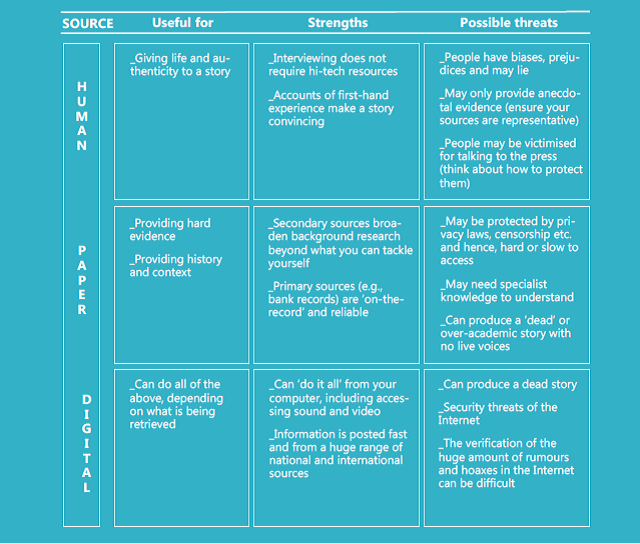 In the next session of the workshop, the trainer asked the participants what in their opinion was the impact of data journalism in Pakistan. The term was new to some, while others had also worked on data stories and were eager to answer. “Data journalism is a type of journalism in which data is either the source or tool or both, with which story is told. There are various reasons for the prominence of data journalism and one of it’s major benefits is that it allows journalists to find and report stories that might not have been found through traditional reporting,” said one of the participants. Another participant said that data allows journalists to communicate information quickly, effectively and it is also easier for the readers to retain this information. It also allows tackling big stories effectively that involve a huge amount of data/information and also had the power of increasing audience engagement through social media friendly visualisations.  A few examples of good data stories were discussed for deeper understanding.

Before the session ended, there was a question and answer session. A few questions were raised about the spike in fake news in the digital world and how journalists could take measures on their part to avoid it. To bring clarity to the issue of fake news, the trainer detailed what constituted fake news. According to Ethical Journalism Network, fake news is information deliberately fabricated and published with the intention to deceive and mislead others into believing falsehoods or doubting verifiable facts. Much of the notion on fake news conflates three notions: mis-information, disinformation and mal-information

A few tools and techniques were discussed that can help in exposing fake or manipulated news and the workshop ended with encouraging the participants to write on issues of digital rights and freedom of expression in online spaces. The participants were happy to have attended a session on investigative journalism as many were unaware of its dynamics in the digital world and found the deliberations quite useful.