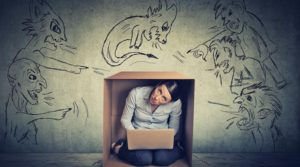 Online sexism is a thing. A deplorable monster that we created at one point in time; but should do away with now, before it becomes uncontrollable — as all our self-created monsters eventually turn out to be. Though if this is news to you then I hate to break it to you, you need to wake up and face this harsh reality which can certainly not be avoided anymore.

There are two specific instances that I recently came across and could not bring myself to just walk away from. One, where a prominent journalist was abused on Twitter, just because she was a woman, interviewing a man. What was the reason, I can’t even say— for I’ve now come to realise that her being a woman is reason enough for these hooligans. There was another such instance that left me utterly disappointed in social media. A woman expressing her poetry on a social media forum. She said that she received messages where men made fun of her and accused her of being an attention seeker. And all she ever did was to beautifully recite her poetry.

Both of these women went through something they didn’t have to but did only because they belonged to a particular sex. Their characters were assassinated in public, they were accused of being greedy for validation and attention. This is the extent of cyber bullying these women — who are not much different from you and I— had to go through for being women.  I sometimes wonder that the ease with which women are abused on the social media for even the slightest of things, is remarkable given the penchant of our society for staying quiet about the issues that really need attention.

But God forbid if it’s a woman and a public figure at that, or has dared to express herself on the social media, men will take it upon themselves to abuse them to no end. Since she had the “audacity” of voicing out her opinion, she must now bear all the repercussions quietly, for she brought this upon herself. This is what happens to every woman who asks for her rights. And social media isn’t too different.

One thing that needs to be understood is that social media is like a meeting place now and just like all other public spaces, men are trying to claim this space as theirs— by forcing their narratives and opinions down the throats of everyone who would listen. Since most men think they’ve a God-given right to use and abuse a public space and that no“shareef” woman can ever even think of taking their place — online sexism is but an extension of that very same narrative, if not more twisted.

It is being seen that women tend to censor themselves on the social media to avoid such unpleasant experiences. Not much different from women removing themselves from public spaces to avoid cat calls and unwanted stares. The self-censorship that we resort to in order to be more acceptable is now seeping into the digital space as well. And we all know how effective that really is. Self-censorship will slowly be the cause for the loss of your voice.

There are a few things that should be and can be undertaken in order to tackle this issue. Firstly, people who’re behind these platforms should deal with the abusers in a stricter manner— kick them out of that platform if need be. There are a few social media platforms that are already on to it, but nothing too noticeable.

Then, online support platforms for those who have been through online abuse can work wonders, so the victims don’t feel alone. Lastly, it is imperative for us to train the younger generations that abusing women online is not an OK thing— that it is not fine for them to judge and hurl at any women online just because she has a voice and tends to use it as well.

This ongoing display of misogyny, blatant sexism and intimidation tactics are intentionally designed in order to end any debate before it has any chance of taking off. It is hard, but the growing online sexism in Pakistan should not be ignored only because it is so hard to tackle it.

Women have been silenced throughout history and no one but women themselves have to rise above it, fight the fight and reclaim their space and their stature. The suffragettes did this by fighting against the silencing of women in the political arena. The feminists in the 70s and 80s did it by beginning the campaign against the harassment that women faced on the streets and in their houses — by organising marches to “reclaim the night”.

It is not a hidden fact that women, whenever they have challenged their culture have been able to make a change. This time we need this to be done on the twisted streets of the social media or these will be —and in some extent already have ruled by the men as well, like everything else that ever mattered.