Nasir Khan Jan who is a rising star of Facebook has turned towards  social-media to achieve a star-status and gain popularity some time ago.

According to Nasir, “I used to be very active in my school days, as I was performing in plays and skits.”  Nasir who loves modelling, singing and dancing said that,  “There is little to do now as I am in college and there are no or less opportunities for performances.”

Nasir revealed that as much as he would like to appear on local TV channels, they have refused to employ him as a performer. In absence of other platforms to show his talent, the 33-year-old Khan Jan has turned towards social media.

“I thought why not use my skills to express my talent on social media,” says Khan Jan. Though his western clothes clearly make him a misfit in this deeply conservative part of Khyber Pakhtunkhwa’s District Dir where religious parties hold full control and have barred women from voting in elections in the past.

Nasir acknowledged that when he first started, he didn’t know being on social media would bring him fame but being controversial made him famous too. He received attention, appreciation and also criticism from Pakistani and foreigns fans – with 289,661 likes and 304,013 followers on his Facebook page and was thus encouraged. His posts show him dancing, modeling, wishing birthdays, and talking about social issues in Pakistan.

Among Nasir’s recent posts on his page he was seen dancing in a towel which led to much criticism from his fans and the audience. After which the social media sensation Nasir Khan jan was invited to a Morning Show on SAMAA TV, Naya Din. The Morning show host Muhammad Shuaeb insulted him and criticized his dancing video in a harsh manner.

A clip from the interview has gone viral where the host Muhammad Shuaeb could be seen disrespecting Khan.

Host Muhammad Shuaeb became aggressive towards his guest, raised his voice and repeatedly called him “vulgar”. Fellow host Kiran Aftab remained silent. Shuaeb was referencing to a video of Nasir Khan Jan in which he can be seen dancing in a bathroom wearing a towel around his waist.

During the course of the show, Shuaeb kept interrupting Nasir while he tried to explain himself and told him to ‘calm down’ while Shuaeb kept passing aggressive and disrespectful comments.

Soon after this Twitteraties came forward in support of Nasir Khan Jan and that became a top trend on twitter. 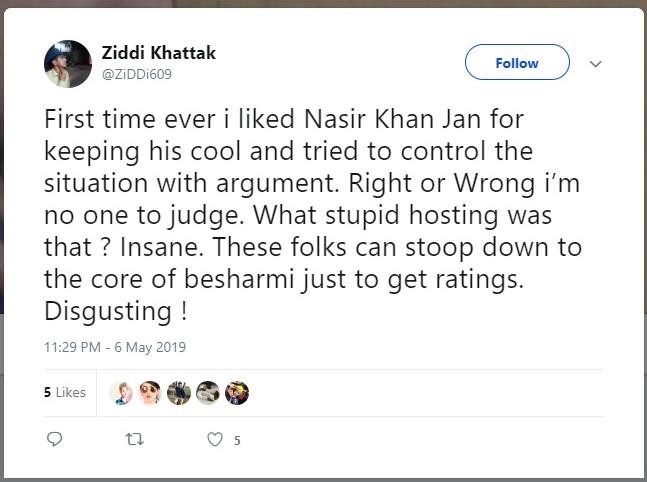 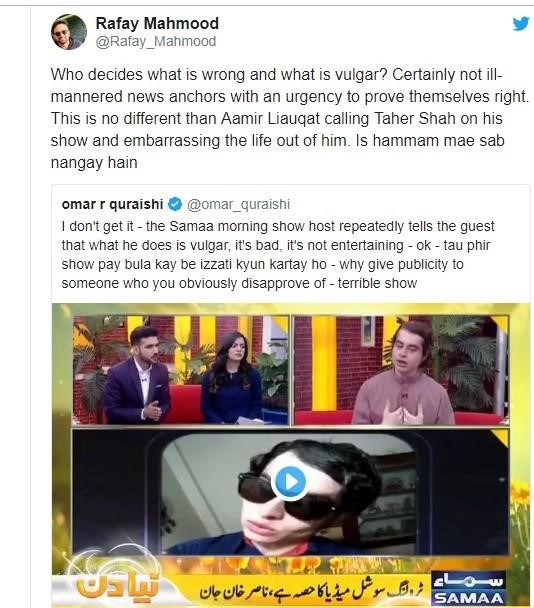 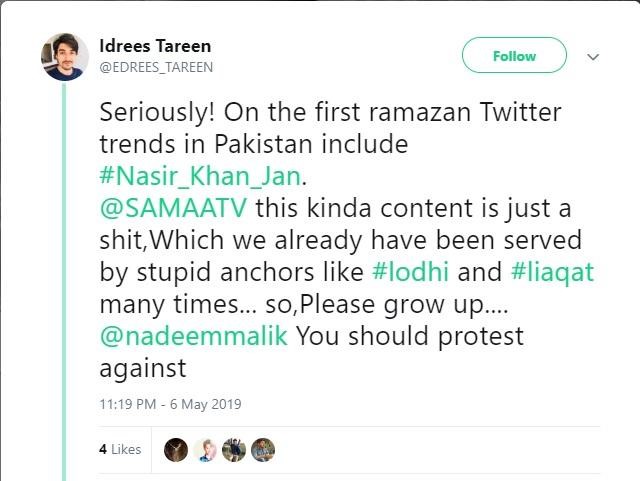 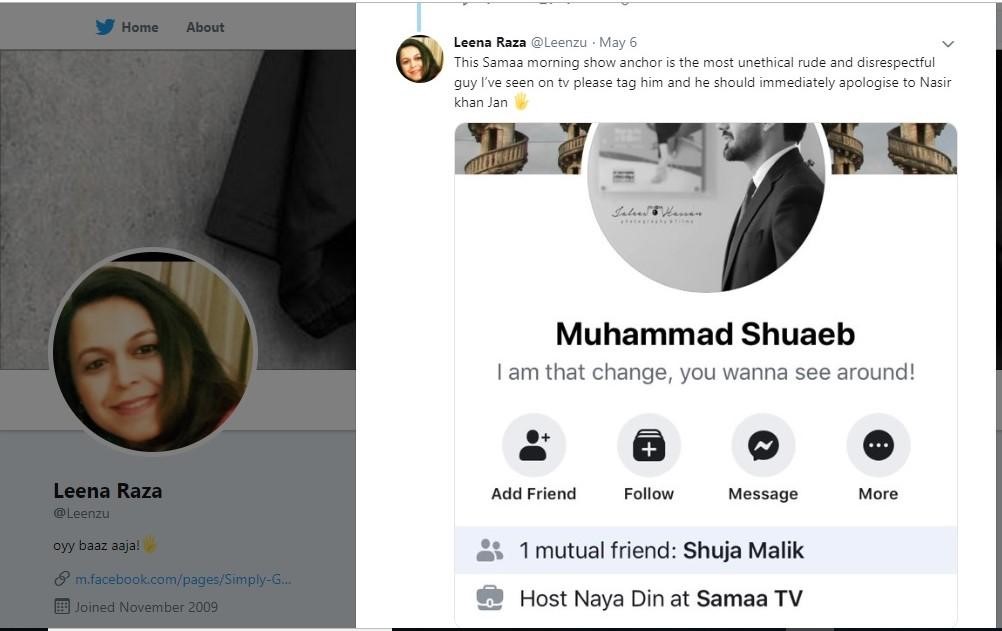 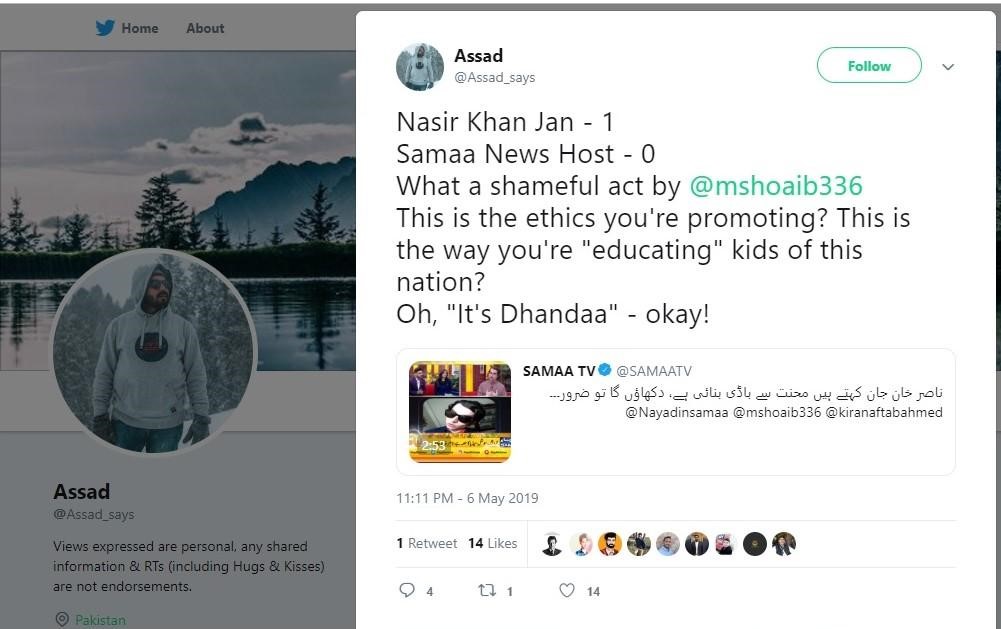 While the clip was also shared by millions of people on Facebook criticizing the programme host Shuaeb and demanding SAMAA TV to officially apologize for their disrespectful behavior. 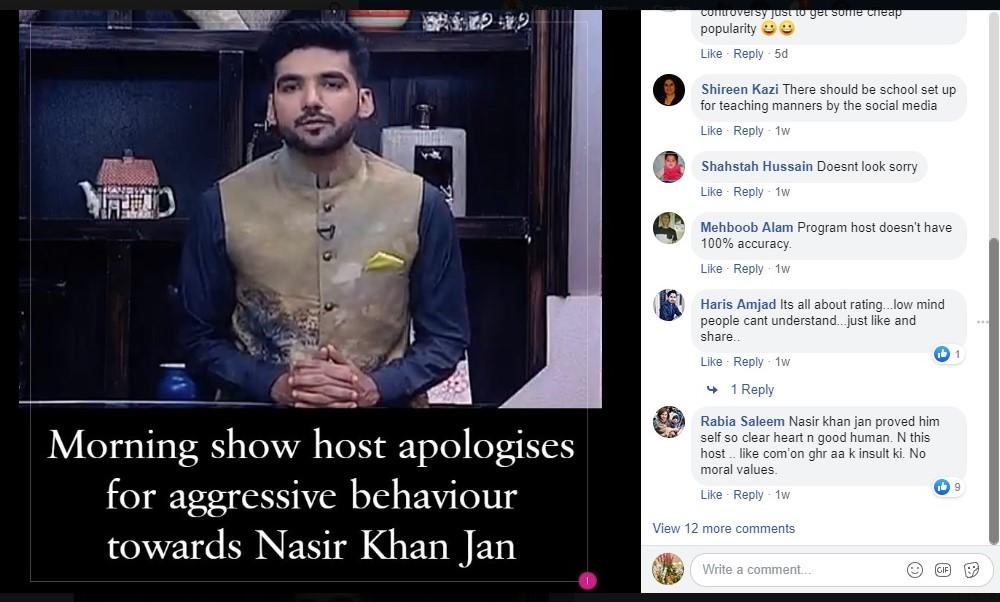 I respect criticism and silence is my best response. Watch complete show, Live session afterwards and then follow haters. Simple

In the very next episode anchor Mohammed Shuaeb  released an apology regarding his behaviour with  social media star Nasir Khan Jan, in his May 6 episode of Naya Din program of SAMAA TV. 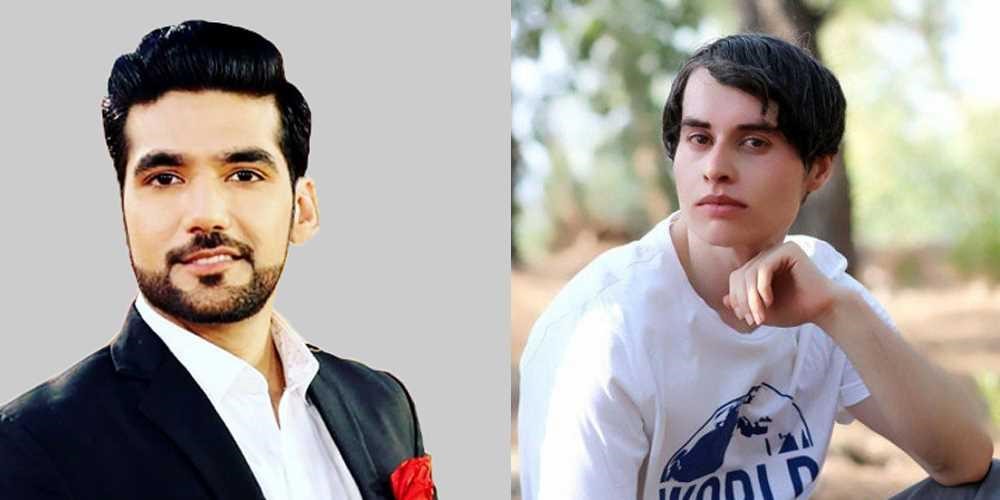 Shuaeb said in a recorded segment, “We had a guest at the show and I did not show respect to him.” The questions I asked him were wrong and the way I asked him was wrong. He added that he ware aware that he hurt the feelings of Nasir Khan Jan,his fans and the audience and for that  he  apologizes to everyone.

Shuaeb said that he had learned his lesson and would act responsibly from now on.

After this, he personally talked with Nasir Khan via telephone in his show for an apology. “I asked you some tough questions, I am embarrassed for what I did and I am deeply sorry for it.”

In response, Nasir Khan Jan humbly accepted his apology and said, “When we go to the show, they all ask us different questions. Sometimes we are ready to handle questions and sometimes we are not ready, as before this show the questions were not shared with him”.

Shuaeb once again apologized and said that he deeply appreciated that Nasir Khan Jan remained so generous.

Thanking his fans for the support, Nasir stated that he had no clue about the questions beforehand. Furthermore, he said that those who always criticized him before also supported him and stood with him after this show and for that he is thankful.

He added that it is important for channels to treat their guest respectfully and promote them in a positive manner.

Nowadays with the widespread use of social media it is important to raise your voice for these issues so that there can be a positive impact. Social media channels are important and the reaction gotten on them has helped change  entire narratives.